skip to main | skip to sidebar

How to win a revolution and lose the plot - An introduction 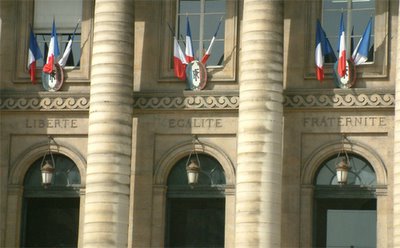 A revolution in takes place in France. "Liberty, Equality and Fraternity" is held up as the rallying cry as mechanical killing machines lop off the heads of the old ruling class, giving way to a French Republic.

200 plus years of "Liberty, Equality and Fraternity" are wearing a bit thin in the welfare police state culminating in the declaration of a State of Emergency to curb nightly rioting.

A large part of this blog is entitled "How to win a revolution and lose the Plot" (HWRLP entries) and is an attempt to relate my experience of living here in France and to attempt to understand what the experience means. Tough call that second part.

Don't get me wrong - I don't hate France or intend this just to be a tirade against all things gallic. Rather it is out of respect for France that I want to raise some issues and criticisms as I experience them. I've always said that sometimes you have to get away to know where you have been, and after 3 years of living here in France I might have a pretty clear idea of where I was at in South Africa. And when I go back I will have something to say about how things should be done. Or rather how they should not be done.

Because, as you will see, there are two sides to France. The first is the picture postcard of the Eiffel Tower and the world's most popular tourist destination. The second France is the one I want to write about, the France behind the facade. The France where the police monitored Blogs and SMS messages during the upheavals of November 2005. Where they arrested young bloggers.

Oh yes, it is also intended to be tongue in cheek, well in parts in anyway... Well ok, what is satire anyway??

this blogging thing a bash, even though I am a lazy typist and I think I've forgotten how to spell - does this thing have a spell-check?? Hah, it does although it wanted to change "blogging" to "flogging", go figure.

But then that's what a lot of what this might be all about: me ranting about life in France. Someone had already nabbed "FrogBlog" - it's just so hard to be creative these days.

Anyways I chose the simplest template, 'cos all these templates with murky shades are just so hard to read - white text on a black background, please, that is so 1996. I'm gonna have to figure out how to cutomize this blog-thing.

So that's it, Welcome to my Blog.